House of Debauch does ETSY. Prints available in many sizes and printed in cyanotypes, platinum palladiums, and archival full-color prints.
Posted by Clair LaVaye at 1:37 PM No comments:

House of Debauch website went up today.
Posted by Clair LaVaye at 1:33 PM No comments:

Email ThisBlogThis!Share to TwitterShare to FacebookShare to Pinterest
Labels: Clair LaVaye, The House of Debauch, vampires

From The Confessions of Count Strigor

(This is just a little light vampire fun I am having with my character, Count Anton Strigor, vampire debaser of the Debauch family. The House of Debauch depicts the Debauches and their tragicomic struggles with the forces of evil in 1909 New Orleans.)

By night, I entered the lady’s rooms and approached her bed where she lay in slumber, her breast rising and falling in a gentle rhythm. Softly, I drew aside her bedclothes. When I saw her beautiful white body and placed my hands upon her smooth flesh, feeling its warmth, I inhaled her scent mixed with the smell of rich flowers that flowed in the wet night air and heard the sounds of cicadas pulsing in the garden that blended with her breathing.

I touched and tasted of her flesh with my lips, at first gently, but then with an urgency borne of my hunger. Poised above her throat, I let the wave of heat from her body rise up and envelop my face. Then I struck her swiftly, driving my sharp teeth deep into her neck until her blood came into my mouth and I tasted the joy of a perfect desire. Her blood was a delight to me, tasting of her youth and class. I drew into myself the strength of her race and felt myself increase in power and lust.

Grim-lipped now, I bent her to my will, taking her forcefully as she swooned under my embrace.

Sighing, a tear escaping once from her unseeing eyes, she did my bidding, moving to my body’s movement, the skin of her breast puckering to the touch of my lips, arching her back, she lifted from the bed in a shuddering spasm as I moved inside her. Her cat-like cries of pleasure brought me to paroxysm and I bared my teeth like an animal above her, piercing the flesh of her shoulders with my nails, lest she escape me at the last.

I found that I had been captured by my prey. I desired her to open her eyes and see me, to reach for me of her own free will. And to that end, one night I slashed open a wound upon my chest and forced her to drink of it, placing her on a path towards eternity.

Each night, I paid a secret visit to her chambers, intent upon her body and her blood. I drew out her death for months, holding her in-between life and death until at last she was pale as porcelain and ghostlike in her movements. It was but bitter pleasure as I drank for the last time from my cup and drained it as I held her in a close embrace, releasing her body slowly at her death.

And that very night, I turned towards her brother, a fair and comely lad, to taste more of the family vintage. The balcony doors of his rooms were thrown open, the curtains drifting in a sleepy response to currents of wind half-civilized by the leafy branches of oak trees that encircled Ravendale Manor.

I smiled as I bent down to brush the curled wisps of golden hair from his face, bringing my hands along his shoulders, exploring his chest, thrusting my hands beneath his back to feel the warm muscular band along the small of his back.

He woke to my caresses, leaned his head upon one arm, all silence, reacting only when I raised his lower body to meet my lips, his expression that of joyful, welcoming passion. His eyes wide open, he proved a willing accomplice to my methods, crying out only as I took his blood, pushing him forward into the bed as I bit his neck from behind. His only words were…”more….”

And so we continued through the night. There was no need for me to weigh him for the consecration of blood, as he bit into my shoulder, smiled up at me, and murmured, again….”more…”

And thus in one night I took the Debauches, brother and sister, into my world of darkness. ....

Posted by Clair LaVaye at 9:36 AM No comments: 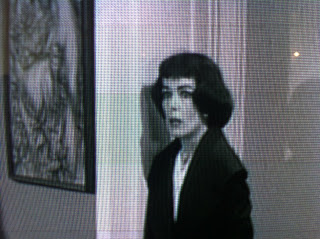 I attended the World Horror Convention in Austin, Texas, and had a bloody great time. Here's a link to my blog posting on the event. Lots of great authors, plenty of wonderful publishers in attendance.

THE HOUSE OF DEBAUCH is released on Amazon Kindle

Buy it on Amazon: http://www.amazon.com/House-Debauch-Adventures-Struggle-ebook/dp/B0044KM3FM

Evil preys upon the Debauch family, turning their carefree days into bloody nights. After the bookkeeper returned to New Orleans after selling the old Debauch plantation to European royalty in the summer of 1909, she seemed to have gone to the dogs. Or is it wolves? Since Count Strigor and his bestial servants took possession of the neighboring property, Clairwil hears something howling.

Her eccentric cousins, Dee and Presia, worry that Clairwil seems different since her recent illness. When Clairwil learns the secret truth about herself and her beloved brother, Zunker, he unhelpfully runs amok in the French Quarter, leaving Clairwil to manage the family funerals. Clairwil dares not ask Dee for assistance, as her love for him has been transformed into bloodlust.

As family secrets and ancient vows of Vampire Hunters are revealed to handsome Dee, young Presia is spirited away by a trio of exotic female vamps with a penchant for opium, and each other.

To save Presia, Clairwil and Dee must work together to find out who has brought this evil into the Debauch’s once sunlit, simple existence. Their struggle with dark forces leads to a showdown on Mardi Gras in the Vieux Carré, where Vampire and Lycan fangs come out and the four cousins learn what "family” truly means.

Published by House of Debauch Publications, all rights reserved.
Posted by Clair LaVaye at 5:46 AM No comments:

The illustrated HOUSE OF DEBAUCH is out on Wowio. Hurrah!

The fully illustrated HOUSE OF DEBAUCH vampire novel for adults, a sexy Gothic fairytale if you will, has hit the digital shelf at Wowio Books. 430 pages of death, blood, and perverse glory.

THE HOUSE OF DEBAUCH: Clairwil and Zunker Debauch have a pressing problem, but they are slow to understand just what it might be. Since Count Strigor and his bestial servants took possession of the neighboring property, Clairwil hears howling and the family’s once reliable bookkeeper, Johanna Reinfeld, has become dreamy and vague.

Shameful behavior runs through the family, as Zunker and his mother, Vixenna Blaisdale-Debauch, are as wild as one can be in 1909 — and not be run out of New Orleans on a rail!

Zunker seduces priests at his old alma mater, the Catholic Academy of the Blessed Lamb, while Vixenna takes down the handsome manservants, one by one. If she only would turn her eyes to the peevish Johanna, who worshipped her as a slave — until she found a new master in Count Strigor.

When Clairwil goes to her beloved brother to discuss their calamities, Zunker unhelpfully runs amok in the French Quarter, leaving her to manage the family funerals. Clairwil dares not ask her cousins for assistance, as her love for them has been transformed into bloodlust.

Before the Debauch family is forever ruined, Dee and Clairwil must put aside their differences and fight their common enemies: Count Strigor, his werewolf servants, and a trio of female vampires with a taste for opium — and each other.

The Debauch cousin’ struggle with dark forces leads to a showdown on Mardi Gras in the Vieux Carré, where Vampire and Lycan fangs come out and the four cousins learn what” family” truly means.


The novel is also available on Amazon Kindle: http://www.amazon.com/House-Debauch-Adventures-Struggle-ebook/dp/B0044KM3FM

And in a variety of other electronic formats via Smashwords: http://www.smashwords.com/books/view/26723
Posted by Clair LaVaye at 12:15 PM No comments:

Promote Your Page Too